I took Amtrak up to Salem, OR the night before and stayed in the guest bedroom, we left around noon the next day setting off through the Willamette farm country. Packing up and planning for the trip really drove home how even now I am still basically over capacity for a Bike Touring setup. I don't think a trailer is the right solution, necessarily. Even if it opens up my range pretty significantly, I am absolutely terrified of running something wide on the roads here. Camp cooking is easy, but I am never so happy about dealing with campfire smoke, it just doesn't usually seem worth it. it's one thing if it's cold, but we didn't need it. I think especially for solo camping the jetboil is going to be simpler, easier, and more fulfilling than campfire hotdogs from a cooler. 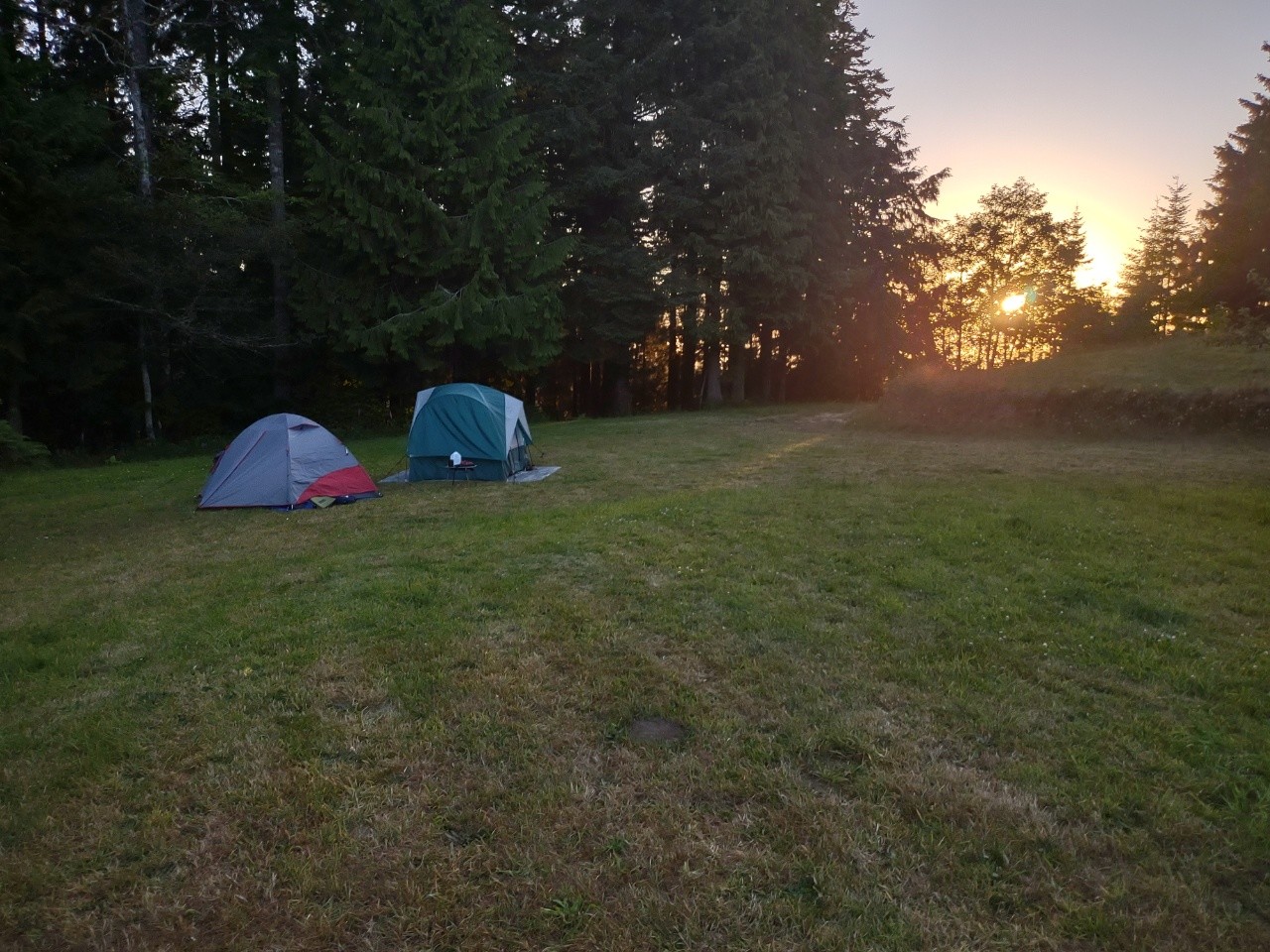 The second night I finally got to set up my hammock camping rig, an ENO OneLink system. I slept better in that than I did on the ground, tbh, which has me 🤔 about my future camping plans. the tent isn't the biggest piece of my kit, but it's close, and it's definitely heavy. with my sleeping pad it basically was a big warm coccoon, though I did rip one of the zippers on the bug net almost immediately, and that would suck out in the wild. 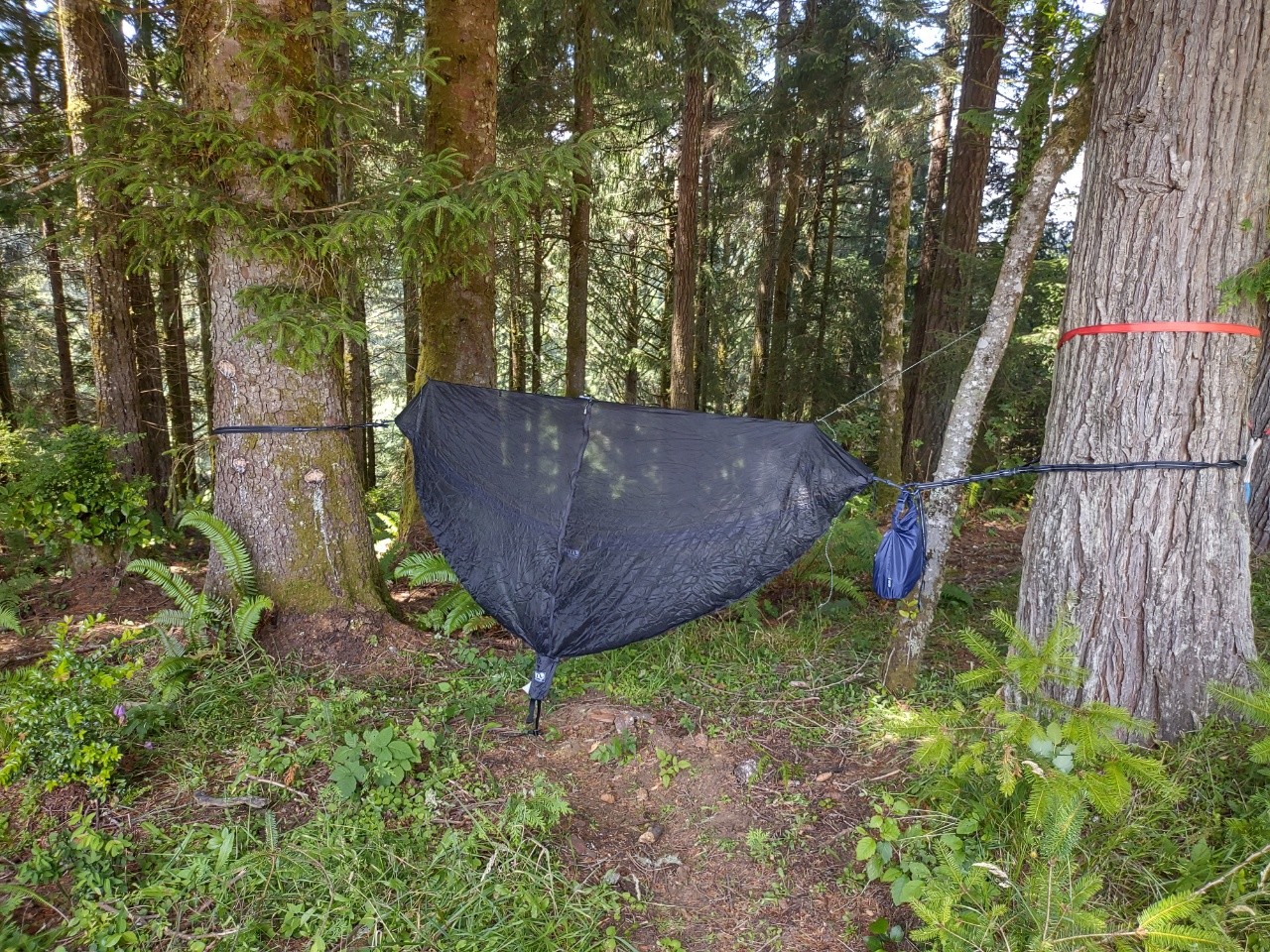 I took this photo about two hours before it started sprinkling, and so I put up the rain fly before it get too wet or too dark, and it was nice to fall asleep with the cool air flowing between the hammock and the rainfly, with the soft patter of rain on the fly itself. In my first picture, the rain fly is set up on my tent and it's sort of all-encompassing; when the fly is off, however, the top of the tent is a fine mesh which would not be suitable. it would be nice to have something which allows for cross-breeze but can keep me dry like this hammock setup can.

I read a bit, and walked around camp a bit. A few weeks back after I wrote my monthly "i could sell all my shit and move to wazuka and learn to grow tea" was triggered today, Hazel recommended that I read Psalm for the Wild-Built which I cranked through pretty quickly out here. The book is cute and hopeful and fun, and very thought-provoking in my current state of discontent. I'm not sure they're expressible yet though.

The end of the trip was a bit stressful. Loaded up the car, found it wouldn't start because the battery was dead because much of the car runs off the 12V battery, and the 12V is not charged by the lithium EV battery. Huff around, get a jump, drive off. Amtrak was two hour and a half hours late due to a broken-down freight train which meant I got home at like 11:30, tired and anxious about missing my train even though Will's house is only like 4 minutes from Amtrak.

It's interesting how camping reminds us of the bare-essence of what we need to experience life. In this case, it was good to get away from home and responsibilities for a bit, but I still had cellular service, i was still "plugged in" and we had so much stuff with us that it was a fair effort to get in and out of the camp site. and of course i brought a bunch of crap i didn't actually use. it really just makes me want to do more lightweight solo travel…

This weekend I will be doing a bit more "glamping" at a Meditation retreat, My First Zen Sesshin, for five days, so we'll see what i think after that, but i may just do some solo bike tour + hammock camping thing soon, mosquitoes be damned.